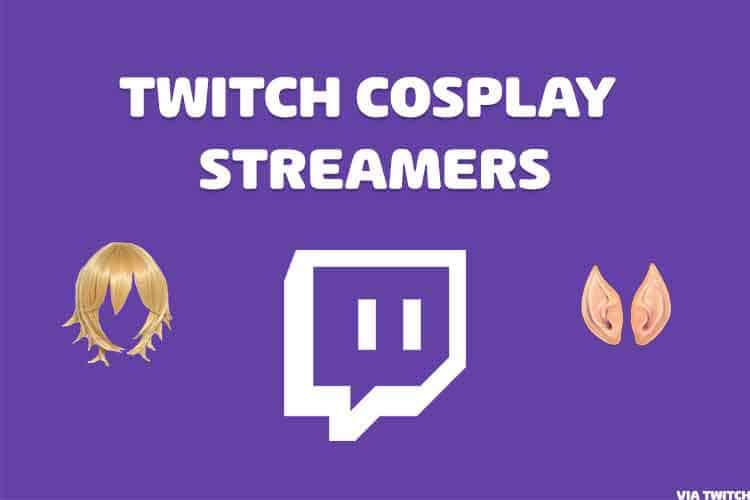 Cosplay has grown to become an enormous part of Twitch streams in recent years. The platform allows passionate creators to show off their style on a daily basis and not just at video game centered conventions like previously before.

For most people, the fascinating hobby involves dressing up and behaving as one of their favorite in-game characters, bringing fantasy worlds to life!

While some cosplayers may choose solely to flaunt their looks, others have been prepared to go one-step further by picking up a needle and thread to create their own ideal costumes! You might even get to witness their live-creations at the annual Twitch-con cosplay contest!

Today, we will look at some of the most active cosplay streamers, who can regularly be found in character!

The Best Streamers of Cosplay on Twitch

Saiiren is a full-time Twitch streamer who currently lives in London. She is well known for her excitable personality, and often likes to play a variety of different titles that include Nier: Automata, Animal Crossing, and her newest favourite – Pokémon Sword and Shield.

Saiiren loves to take part in Twitch cosplay and has dozens of different character outfits. The majority of the characters she cosplays are from anime, where you can find her as: Megumin from the KonoSuba series and Uraraka Ochaco from My Hero Academia.

Saiiren recently attended TwitchCon 2019 as Tamamo-no-Mae. She is also set to be opening her own clothing line for anime lovers, called Closet Weeb, after collaborating with SimplyLuck this year!

Be sure to check out her Instagram and Facebook that are mostly dedicated to her Twitch cosplay photoshoots and live-updates for upcoming events.

Boxbox is a professional Twitch streamer from Virginia and a former competitive LOL player. Although he attended multiple Twitch Rivals tournaments after joining Velocity esports, he unfortunately never went pro due to only reaching the heights of a substitute player.

Albert now chooses to do cosplay on Twitch because he finds it “fun and rewarding”. Like many others on this list, he enjoys the process of creating characters to play while streaming.

BoxBox mostly sticks to League of Legend characters while performing his hobby, and often cross-dresses in more traditionally female characters. So far, he has created and dressed in streams wearing fifteen different cosplays which include: Arcade Riven, Star Guardian Soraka, and KDA Akali.

Nowadays, you can catch him live on his stream, or regularly attending TwitchCon and other related gaming/ cosplay conventions. He is also currently developing his own card game, with updates routinely posted on his Twitter account.

Yuuie is a fun and upbeat Twitch partner from Southern California who regularly uses cosplay to enhance her game streams.

She describes herself as a Mediator personality type (which is an introverted idealist), and often vlogs “slice of life moments” for her fans, while sometimes dressed as different characters.

Her current game of choice for streaming is Animal Crossing, in which she has created several cosplay looks. In addition to this, she has done other cosplay photoshoots, with costumes such as: Tracer from Overwatch, Lara Croft, and Wonder Woman.

One of her channel’s mainstays is “Dress Sunday,” and during those videos, she always shows off a new dress. This sometimes includes cosplaying as anime or other pop culture characters!

Natalie not only loves anime, but also playing with her virtual reality headset. If you tune into watch her live you can check her playing popular VR games e.g. Beatsaber!

Haley is a vlogger/ streamer from Texas USA who produces plenty of great daily content featuring her cosplays. Unlike some of the other cosplayers on this list she will even create whole environments to match her impeccable photoshoots.

Aside from cosplaying on her streams, she also does it to raise money for charity. Last year she managed to raise $10,020 as a part of St Jude PlayLive 2019, and then a further $10,514 at Gamers Outreach!

Some of her most popular Twitch cosplay characters include Velma Dinkley from Scooby-Doo, an epic looking Blood Moon Evelyn from League of Legends, and several gender-bent characters like Ken Kaneki from Tokyo Ghoul.

You can find her showing of her incredibly detailed outfits at regular events such as Twitchcon and IkkiCon. If you are unable to go, her photoshoots are available to purchase from her Instagram account, which run the gamut from anime, to movies like The Purge!

Pokimane is a bubbly streamer from Canada who’s currently the most followed female on Twitch. Her popularity exploded through connecting with others on the platform, and you can also find her dressing up in epic costumes every once in a while!

Pokimane loves to role-play a variety of different video-game characters on her channel. Each of her cosplays are created to look as authentic and detailed as possible, and she has no problems pulling them off with ease to look irresistible for her fans.

Some of her more exciting cosplay appearances are: Serena from Pokemon, Daenerys from GoT, Lunar Empress Lux from League of Legends, and Princess Daisy from the Mario games.

Imane has been previously nominated for Content Creator of the Year, and then won Twitch Streamer of the Year in 2018. Be sure to check out her social media channels (YouTube and Instagram) that follow her highlights from live game-streams, and recent travel/ modelling news.

Lindsay is an experienced and dedicated Twitch cosplay gamer. She works hard to make sure all of her characters are as authentic as possible, ranging from makeup to elaborate accessories.

Some of her most popular characters include: Yennifer from the Witcher series, a genuinely epic gender-bent Winter Soldier, and Elizabeth Comstock from the Bioshock game series.

Lindsay’s YouTube features game breakdowns with “best of” moments and personal vlogs, while her Twitch streams consist of a variety of popular action/adventure games; from Kingdom Hearts, The Witcher 3, and The Borderlands series.

Last year she attended both ComicConParis and Fanx dressed in full cosplay. Her Facebook page currently lists all of her newest cosplay characters and updates on upcoming creations.

You can purchase her gorgeous cosplay photoshoots prints at her online store, as well as subscribe for further, more mature, cosplay content!

Zachary “Sneaky” Scuderi is an esport star who plays League of Legends professionally. He first gained mass-celebrity status when he cosplayed one of the characters from the game and has since then been actively cosplaying ever since.

You might be surprised that Sneaky specializes in cross-dressed cosplay, and has managed to turn some heads in the gaming world on many occasions. What’s more is that he’s shockingly good at it, and often appears more attractive than the females images he’s compared with!

Sneaky has an extensive list of female characters in his inventory, some of which include: Star Guardian Xayah from League of Legends and a genuinely stunning Divine Sword Irelia.

He was interviewed on ESPN for his gaming prowess and stunning cosplay choices, and was also featured in a Newsweek article that focused on his cosplay.

Zachary is a passionate and talented cosplayer who enjoys sharing his creations. You can view his portfolio of professional cosplay photoshoots on his Instagram.

Amouranth is a Twitch-gamer/ cosplayer who mostly streams “ASMR” and “just chatting” sessions. She is a model in addition to her cosplay on Twitch and has a considerable number of social media followers across all her accounts.

Some of her most exciting character cosplays were Jingle Tracer from Overwatch, Sylvanas from WoW, and a genuinely spectacular Gwenom and Spider-Gwen. Her cosplay photoshoots are of professional quality, and she also sells prints on her site.

Kaitlyn was featured in an article by GameRant about her rapid follower gain after being banned temporarily. Towards the end of 2019, and after somewhat of a renaissance she reached new heights when her Twitch channel acquired over 1.5 million followers.

Amouranths owns a character entertainment company for which she creates, maintains, and wears dozens of different high-quality cosplay outfits. Her current net worth is approximately two million dollars!

Emiru is a computer science student, game streamer, cosplayer and a master at make-up. If that’s not enough, she is also an League of Legends partner who streams for Radiance, an esport site focused on spreading positivity.

Emiru loves to dress up in anime cosplay characters when she’s busy streaming and has become prolific on the platform for dressing up in impeccable costumes. These include favorites like Pajama Guardian Ezreal from League of Legends, Zelda, and Hatsune Miku from Vocaloid.

You can tell Emily puts a ton of effort into her passion. She now has over 72 videos on her channel and is likely to be streaming live in a completely different style each day, to the point where you might not even recognize that it’s her!

You can also catch her on TikTok, where she has over 288k followers! Most of her photoshoot prints and information can be found on her Instagram, Twitch, or Twitter accounts.

Anyraecosplay goes the extra mile for her creations by adding hyper-realistic body paint and special effects. Her passion is cosplay, and her Twitch channel focuses on how to create quality costumes with ease.

She provides tutorials, examples, and streams of how she creates all her looks, with body paint and effects as her specialties. Andy’s Youtube channel is the best place to visit if you’re wanting to learn from her where you’re bound to be amazed.

Andy has a vast portfolio of videos and photoshoots. Some of her most stylish looks are Mad Moxxi from the Borderlands game series, a gender-bent Pinhead from Hellraiser, and some original work like her elemental dragon cosplay series.

She has been spotlighted on the cosplayer site TheConArtist for her dedication to the craft. Head over to her popular Facebook page to keep up date on all of her current cosplay endeavors and upcoming projects.

We hope you enjoyed this post on the top Twitch cosplay streams.

Let us know of any streamers we have missed!