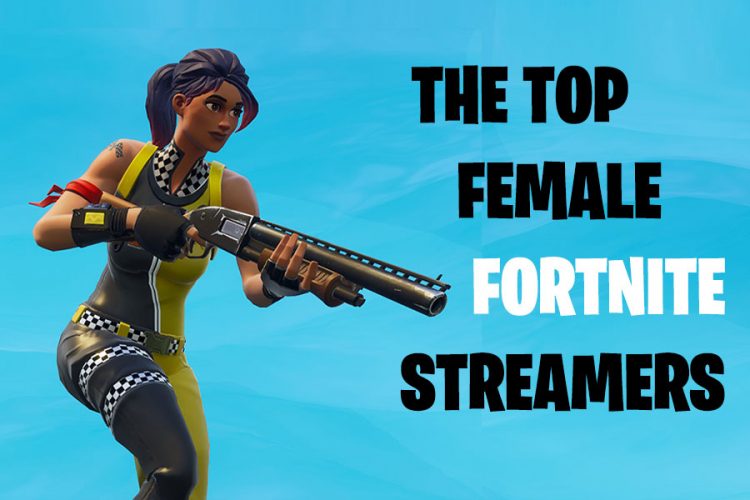 Fortnite is one of the greatest battle royal games in the world. The game has accumulated over 250m registered people, and is now played by an estimated 35% of females.

Although the majority of girls are considered entry-level gamers, and the ones who are at the top are underrepresented in the main event of the legendary Fortnite World Cup – This does not mean that there aren’t any highly-skilled ladies out there!

In the last couple of years we have noticed an increasing amount of Fortnite gamer girls achieve many respectable accomplishments of their own, which has seen their inclusion into an number of prominent esports teams.

The girls have been silently grinding away in the background, and some of them are beginning to get seriously good!

In this post we will focus on the pro’s and streamers who are the best in their gender category; so if you love both Fortnite and Female Streamers – Then you’re definitely going to enjoy this combo!

Who are the best Female Fortnite Streamers?

Electra, formally Electrahhh, was born and raised in Texas. She first started out on Twitch in 2014 and often streams a variety of different FPS titles. When it comes to Fortnite, there’s no denying that she is noticeably up there with some of the best female streamers.

Ashley first got into video games when she was very young, and feels they have always been a big part of her life. She didn’t take Twitch too seriously for the first two years she was introduced to the platform, but has been grinding away almost every day since, amassing a respectable 200,000+ followers!

Ashley presents a fun and lively personality in her streams that has helped her to win over so many fans. She certainly knows how to handle herself in the battle royale, but has often been criticised for not having that final bit of quality in her game.

One Shot Gurl is a female Fortnite streamer with many talents. Not only is she a dorky girl gamer who loves playing video games, but she is also an aspiring musician, having gained her undergraduate degree in the musical arts.

Whether this is her true passion or not only time will tell, however there’s no reason why she can’t become a master at both!

Julie has a fairly wholesome personality that makes her very relatable to her growing legion of fans. She does not try to over-exaggerate events in her streams, flaunt her looks, or try to act like “one of the boys”, much like many other the other raising females out there.

Whether you adore her for her game-playing skills or for her prowess as a musician, it’s hard to deny that Julie has a strong future in the public eye – one way or another. All in all she must be doing something right, as she’s managed to gain a respectable 500k subs on YouTube!

Tune into her Twitch stream or visit her YouTube channel to see her playing many different rhythms, and video games, including Fortnite!

Danii is another rising star in the Twitch community that has both incredible looks and skills. She likes to stream a wide variety of different video games but generally tends to focus on her beloved Fortnite!

So far, she has managed to accumulate over 100,000 followers on her channel, which is often a shock to those who don’t already who she is – as they are generally stunned to learn that she isn’t more popular.

Dani plays Fortnite with a chilled and laid back approach, which is in contrast to many other streamers out there. She knows the game like the back of her hand and never gets to flustered in the heat of the moment.

If you start following her now then you can rest assured that you are getting in on the ground level of her fan base. Her streams on Twitch won’t disappoint, as she’s got the personality, and the skills to be a pro.

Sweet Anita is a Fortnite streamer with one incredibly unique aspect.

Yes, she is an attractive female gamer, we’ve all seen that… but what really makes Anita stand out from the crowd is that she is suffers from Tourette’s.

Anita has a posh but adorable British accent, which makes her foul-mouthed tics seem that much more entertaining.

While many mean-spirited “trolls” will simply tune into her stream to gawk and poke fun, Sweet Anita does not care. Instead, she has managed to amass a huge following on Twitch by being very vocal about her affliction and the toll it takes on her life.

She also plays games, so let’s not forget about that..

Sweet Anita has made a name for herself where many others haven’t by exploiting her affliction in humorous ways. She uploads highlights to her YouTube channel to showcase her various outbursts, and frequently features them in humorous episodes.

Followers tune into her streams in the hope of her catching her saying something hilarious, and she’s laughing with them all the way to the bank $$$. Anita just so happens to be one of many people in the world who is very proud and upfront about her condition!

Kroatomist is a red-headed Fortnite streamer who is another rising star in the community. She’s a Twitch girl who is quickly gaining attention for her above-average skills, as well as her striking red hair.

Although it has yet to be seen if Kroatomist has the skills to go up against the top female professionals in the gaming sphere, she has been actively competing in a number of recent esports competitions, which has earnt her some credibility and respect.

Her Twitch stream does good numbers, and more and more people are tuning in each day to see what she can bring to the Battle Royale. One caveat, though, is that she streams in Italian, which is her native language.

While this may make her popular in her homeland of Italy, this can be an issue for English-speaking streamers who are very likely to have no idea what she’s saying. Still, her skills are formidable, and she’s one to look out for if you’re a lover of Fortnite.

Maddynf is a competitive Fortnite gamer and YouTube star. She regularly streams her live games on Twitch, but gets the majority of her views from her entertaining YouTube videos.

Maddy’s content often focuses around Duo, and Squad matches with random people (that she may or may not have met on tinder), or you might even find her teaming up with friends to compete in the odd UMG tournament online.

So far, her YouTube channel has managed to accumulate over 330,000 subscribers, which is a testament to the way this girl plays the game. She has some of the best building-skills out of all of the female streamers on Fortnite, and is very sharp with her decision making.

Maddy’s fans love her for her chatty and charming personality. When you couple that with her noticeable gaming talents, you can be sure that only good things are waiting around the corner!

Pokimane is the most followed female streamer on the platform. She predominantly streams Fortnite and League of Legends, but her true love for games is always going to be with Pokémon and the Legend of Zelda.

Like most gaming stars, Imane started playing video games at a very young age and was quick to jump on the Twitch band-wagon as soon as she realized her hobby could be monetized.

It wasn’t long before she soon received several lucrative sponsorship deals that meant she was finally able to quit her job and stream full-time for a living.

You can catch Pokimane on Fortnite everyone once in a while when she’s not busy streaming ASMR sessions, or “just chatting” with close friends. Her Battle Royale skills have unquestionably developed on the game over time, and you’re likely to find that she makes it comfortably into the final ten.

Pokimane was recently awarded her own Fortnite emote, which is something she was obviously very proud off! So when you do tune in to catch her playing next, expect to find her flaunting her dance moves in hilariously ways, before mischievously pumping her enemies in the back of the head!

To find out who are the top 8 Female Fortnite Streamers!