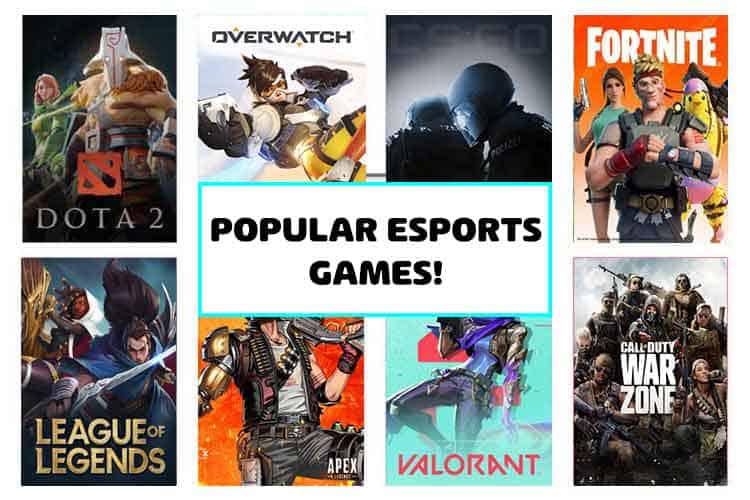 If you’re ready to get serious with your gaming, then you might be wondering what popular esports games are played at the highest competitive level.

With so much potential at stake, it makes sense to channel your time and energy into a game that is filled with potential while having one eye open for the future.

In this post, we will cover a multitude of different gaming genres – to provide an introduction of what you can expect – from some of the top games in the esports scene.

What are the Most Popular Esports Games?

Dota 2 was first released by Valve in 2013 and has captured the fascination of the gaming community ever since. It is played both professionally, and casually by millions of passionate fans worldwide, for its gripping MOBA action/ strategic gameplay.

The standard Dota game consists of 2 teams of five characters. Each team has the goal of protecting their own fortress, while destroying the oppositions on the other side of the map.

Each character on the team has their own unique abilities and can be controlled by other players. At the begginning of the match their goal is to earn gold by fighting their opponents, which in turn make their characters stronger.

When one team manages to fight through their opponents armies and destroy their opposing fortress, the game is finally over. Essentially it’s like a game of “wizard chess” filled with magic and spells, for those that still can’t get their head around it!

Dota 2 is famous for its annual tournament – the International. The competition is widely regarded as the major event in the esports circuit and features a whopping prize pool of over $30 million!

If you’re looking to get involved with one of the most popular esports games, it can be downloaded for free here.

Fortnite is a third-person shooter survival game that was launched by Epic games in 2017. The game has three distinct game-modes, with the most popular being the highly addictive battle royal!

At the start of the battle royal you will be taken aboard the ‘Battle Bus’, and air-dropped across the games expansive map with 100 other players.

After landing, the goal is to scavenge for weapons, items, resources, and even vehicles to have the best chance of eliminating all other opponents.

Unlike many other conventional third-person shooters, Fortnite gives its users the ability to create defences and structures around them at a rapid pace. This can help in protecting against other players during combat and creates a greater technical aspect to the game.

The highly anticipated Fortnite World Cup is the largest event In the community. The competition generates a prize pool of up to $30 million, which shows just how big the game has grown.

Fortnite is regularly updated, along with the maps at the end of each season. It is one of the most popular esports games that is here to stay. You can download it for free from here.

League of legends is a decade-old game that is still going strong to this day. It was developed and published by Riot Games, and has become very popular on mobile.

The game-play principles are similar to other MOBA’s as It is also a 5v5 team game, where you and your teammates try to win by destroying the enemies base.

In LOL, players assume the role of an unseen “Summoner” that controls a “Champion”. The Champion is a character that has its own unique abilities.

The role of the protagonist is to fight against the other team, or the computer-controlled Champions, with the goal of destroying the Nexus – a structure at the center of the opposition’s arena.

There are various League of Legends tournaments that take place throughout the year, but the biggest one is the LOL World Championship. In the World Championship; teams compete for the sort-after Summoner’s cup and a prize pool of over $1 million!

Tom Clancy’s Rainbow Six: Siege is the latest instalment of the first-person shooter franchise. It was released by Ubisoft in 2015 and primarily focuses on destruction, gadgetry and intense close quarters combat.

Similar to Counter-strike, the game is centred around two teams of attackers and defenders; the terrorists and the counter terrorists. The game supports 5v5 matches and features over 20 different maps that host a wide range of gameplay modes.

These include: Save the Hostage, Bomb Threat, Secure Area, Tactical Realism, Terrorist hunt, Situations, and Outbreak. All modes have varying objectives for both teams to work together co-operatively in each round to complete.

Rainbow Six: Siege has its own dedicated player base, and is played competitively as an esports game. The major competitions for R6S include: the Pro League, (featuring esports teams from all of the 7 continents), and the five week “Six Invitational” tournament.

In 2020, the Six Invitational is set to include a prize pool of $3,000,000! If you’re looking for an esport game which is slightly underrated and has huge potential, then this is the one for you!

Apex Legends is a battle royal game that was released on Feb 2019. The game is based in the Titanfall universe, and sees legendary characters with powerful abilities team up to battle for fame and fortune on the fringes of the Frontier.

The game-play consists of twenty 3 man squads that have to gather both resources, and weapons in an attempt to defeat all other teams in combat. Initially, each team lands on an island that is free to explore, similar to other games in the genre.

Apex Legends has gathered a lot of steam in a relatively short time. The game hit 50 million players within the first month after its release date, and is estimated to have 8-10 million weekly players according to publisher electronic arts!

The Apex Legends Global Series is one of the newest additions to the esports scene. Currently, the competition has 12 live events with a total prize pool of $3 million. Players looking to qualify for the event will have to qualify through a series of online tournaments to earn a spot in one of the Premier and Major Events.

With so many live events and a such large prize pool, you can be sure that this is one of many new popular esports games about to flourish.

Rocket League is a hybrid of arcade-style soccer and vehicle powered mayhem. It was released by Psyonix in July 2015, and has been gaining players rapidly ever since.

If you’ve never played Rocket League before, then the concept is fairly simple. The game involves simulating soccer, but in the unconventional way of using rocket-powered cars!

The game-play features physics-driven manoeuvres, allowing players to boost, jump and spin their car in mid-air with the aim of scoring a goal. You can also destroy other players vehicles by propelling your car towards them after gaining a boost, as well as make various modifications to your motor.

Rocket League includes casual and competitive Online Matches, which has seen it become adopted as a popular esport game. The game is regularly featured on many smaller tournament based platforms, and has its own larger biannual competition “The Rocket League Championship Series”, where many professional players participate in the event!

Rocket League is a game that’s based on skill and very little luck, it’s a fine choice for anyone searching for a game that’s very hard to get good, but still insanely fun!

Overwatch is a vibrant team-based shooter set on a near-future earth. The game was first launched by Blizzard Entertainment in March 2016, and is hugely popular by players of all ages looking to dive into the FPS action.

The matches are made up of an intense 6v6 battle between a cast of unique heroes, each with their own individual style of play. There are currently 30 characters to choose from, and many challenges for the world’s heroes to team up, and take on.

The main objective of each team is to work together to maintain their control over the control points on the map. This can also include moving the payload to pass through the map within a specific amount of time.

The Overwatch League is the most prestigious tournament for those wanting to play the esports game on a professional level. The competition had a whopping $5 million prize pool for the 2019 season, making It one of the largest winnings for any game.

If you prefer a unique twist to your single-person shooting games, you need not look any further.

Overwatch can be bought from their official website here.

Counter-Strike: Global Offensive (CS:GO) is a multiplayer FPS developed by Valve. CS:GO is still regarded as one of the most popular esports games, having one of the largest fan based communities in the world. It is the focal point of many major tournament events, since its first release in 2012.

If you are new to the counter strike series; the game comprises of two teams, being the Terrorists and Counter-terrorists. The task of each team is to eliminate the other while also completing separate objectives that depend on the game mode.

The CS:GO Majors is considered the most prestigious esports tournament for the game, which consists of 24 teams from all over the world. The event features a $1,000,000 prize pool, so If you like first-person shooting games, then this is one you cannot ignore.

CS:GO is free to download and play from Steam.

Arena of Valor is a MOBA game that was primarily designed for the mobile device. It was published in 2018 by Tencent Games, and has seen its following soar quite rapidly since.

Much like other titles in the genre, the game consists of two opposing teams that have to destroy each other’s bases on either side of the map.

However, this is not quite as easy as it sounds. In order to reach this victory; players must first take down all of the enemies defence towers, as well as defeat any neutral monsters found along the way – in a bid to earn additional XP/ Gold, used for levelling up their teams characters.

Arena of Valor revolves around classic 5v5 combat, and includes 85 unique and powerful heroes to choose from. Each hero can be categorized into one of 6 races: Marksman, Mage, Assassin, Tank, Warrior and Support.

The role of each race will determine your strategy to draw first blood and ultimately crush your enemies!

Arena of Valor has over than 200 million players and its own World Cup competitions. It is currently up there with most popular esports games played on mobile!

The game can be downloaded for free from the Google play store.

Super Smash Bros Ultimate is the latest release in the well-established cross-over fighting franchise. It was first published by Nintendo in 2018, and is arguably one of the best fighting games in the world right now.

Smash Ultimate sees all your favourite Nintendo Gaming icons clash in the ultimate showdown. So far, this features a rooster of over 70+ different characters (plus DLC). The game gives players full control over their selected characters to square-off in action-packed battles, on more than 100 classic and returning stages.

Super Smash Bros is widely played as a competitive video game, and has become very popular within the esports scene. Although Nintendo do not sponsor their own global competitions, organizers regularly feature the game in many of their major tournaments events each year.

If you’re looking for a fast fighting paced game that’s able to provide hours of entertainment, then this is your game.

To find out the remaining popular esports games!